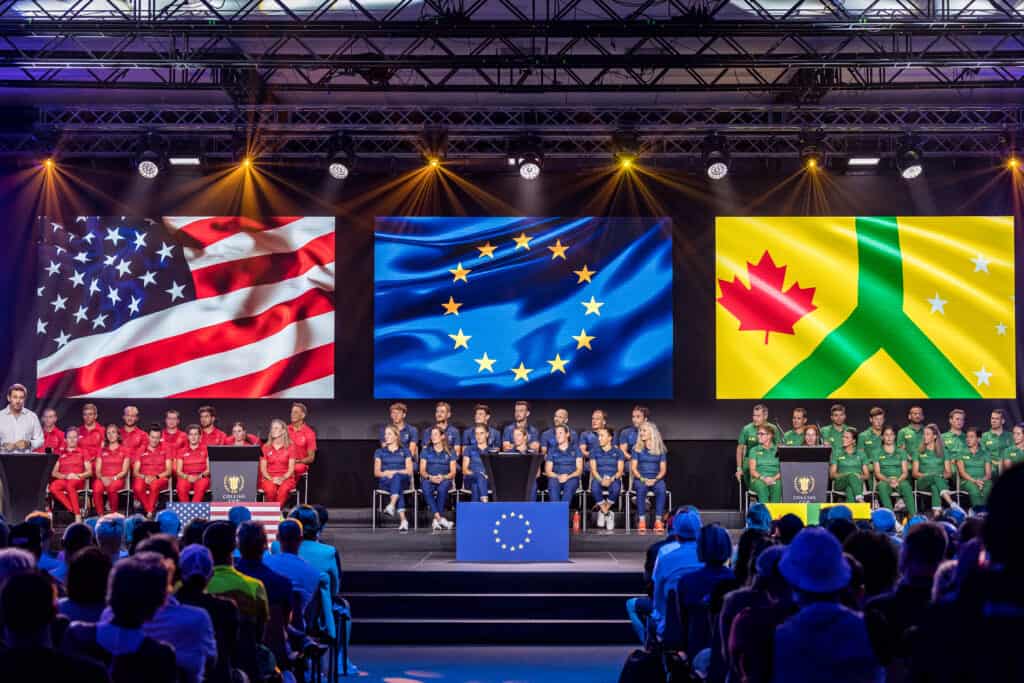 Samorin, Slovakia: The second edition of the Collins Cup has thrown up some mouth-watering match-ups following the draft during the Opening Ceremony ahead of the 12 match races this Saturday (20 August).

In an auditorium packed to standing room only, PTO professionals and triathlon fans alike learned the full line-up of 2022 Collins Cup matches for the first time – setting the stage for some tantilising battles.

You can relive every moment of the Collins Cup Opening Ceremony via PTO+.

Hosted by Alex Payne, who will also lead the press conference on Friday 19 August and the Collins Cup race on Saturday 20 August, this year’s draft pick threw up some exciting racing prospects.

True greats will go head-to-head-to-head over 100km – a 2km swim, 80km bike and 18km run. We’ve got three Olympic Champions on board and a host of World Champion athletes ready to push their limits for their team.

Here are the full match-ups:

“The motivation is huge. I definitely want to make my team proud and to be in such a strong match… I feel like I’m back in the ITU old times. We raced each other a long time ago, both Flora and Sarah, so yeah, it’s going to be tough. I’ll have to bring out my best and it’s going to be full-on from the start.”

On being the one to beat: “Yeah, I would say that being the current Olympic Champion I have to be pretty comfortable with that.

“But, you know, I mentioned Daniela in my interview and perhaps I’m regretting that a tiny bit right now. But it’ll be great… I’m kind-of the newbie coming into this so I’m really excited to race these two – they’re both fantastic so it’ll be a great match-up.

On the Collins Cup:

“It’s been amazing, definitely bigger than I could’ve imagined and it’s been really fun to hang with all the athletes and get to know some that I’ve never raced before and just experience the whole vibe.”

“I’m super excited! I mean – ITU people up here. Vittoria and I have raced a lot in the ITU world so she’ll probably be at the gun in the water and I’ll be coming from behind, so she’d better watch it!”

“It’s a big honour to be in Team Europe to have such a team event as my last international race. I’m very excited to start here thank you very much. I’ve raced, actually, team events since 1999 and it was always really exciting.

“I think there’s some extra pressure because you’re racing not just for yourself but for a whole team. I think I’m even more nervous like that, but it makes it more exciting and I’m really excited to race with these two opponents.”

“I think this year my team will do really well. We’re ready for this and on Saturday I’ll be ready to do my best for my team.”

“I’m actually really excited because they’ll be battling it out in the swim again and I can just sit right behind them. They can get in each others’ heads and forget about me. I don’t think we [Team US] have work to do. I think we’ve done the work.”

On the rivalry with Salthouse: “I don’t know… maybe ask Ellie. I think we’ve had it out a few times and, you know, we’re just looking forward to racing each other… I want to have a solid performance for the team and hopefully bring a win home for the team and the team points. It’ll be strong out there and I want to bring it.”

“I think we have a really strong Team International this year so bringing home some extra points for them will definitely bode well on Saturday and hopefully we can bring home that coveted Collins Cup on Saturday.”

On how he’ll fare: “I guess we’ll find out Saturday, but I always show up to win and that’s the plan. These guys are no slouches, I know I’ve got my work cut out for myself. I mean, just fast across the board, there’s no weaknesses in this heat, so just gotta hit it from the gun.”

On cramping on the run at the PTO Canadian Open: “I didn’t feel too powerful coming into Edmonton. The race week I changed a bit on the saddle position. Maybe went a little bit too high up and I felt that in the race… no injury from it but a lesson learned and hopefully I should find a position for Saturday.”

On the race dynamics: “You have to be more by yourself here… we will see if either me or Hayden can try to stay in touch [with Kanute]. If not, we will probably have to stay around each other. Then it’s not going to be an easy run, especially with Hayden’s run legs and Ben’s attack from the swim and on the bike. So it’s going to be a difficult day but I feel strong.”

On facing Hayden Wilde: “I had heard, actually over in Canada, he applied for a wildcard and wanted to race me and Gustav – or one of us – and he had been, together with Alex, the one to beat in the short distance this year and has really been in form and I think it’s a good benchmark.”

“It’s been a minute, I’ve missed these boys. It’s been about a year since I’ve actually raced them both… so it’s been great watching them come up to the bigger distance and we’ve definitely missed them. It’s just been Alex and I having a great battle but we’ve missed our gold medallist to make it a trio of battles, so yeah, looking forward to Saturday and seeing how it goes.

“I feel good. The run legs are there. I’ve been on the time trial bike about seven times. Swim’s going real well – real stoked about how that’s going – Comm Games was fantastic. I was stoked. Everyone was like, ‘how the heck did he swim like that?’ And that was myself too! If I could pull out a swim like that and feel good past the 60km mark and yeah, hopefully have a good run.”

“I just got my butt handed to me last year by Jan [Frodeno]. The swim was the most embarrassing experience of my life. I got lost out there and couldn’t see the swim buoys and honestly almost thought I would have to get pulled out of the swim and came out and was five minutes back. I did my best but, yeah, it was just a very disappointing race. So, it’s been an important highlight of the year and I’ve really been coming here targeting it. I hope I can see the buoys in that canal, it’s pretty easy! But I’m fit, I’m ready and fired up, so it’s going to be great.”

“This year’s been amazing. I’ve been taking it a bit less seriously, having fun with it. And, yeah, I feel really lucky to be paired with two duathletes, so yeah, it’s a nice opportunity. Behind all the jokes, I’m pretty serious about what I do. To be honest I don’t think Sam and me are cut form the same cloth and I’m going to show that. He cried out for allies and he got Lionel, so they can two-up TT and see if they can make it back.”

“Team International is great. I think we truly have a shot in this one. I would just like to speak to Sam Laidlow… you guys may not know but he’s borderline a professional rapper. And in his first diss track he actually mentioned both Sam and I and he’s gonna regret that on Saturday I assure you.”

“I’m feeling good. This is the match-up I wanted so I’m really psyched right now. I’m one of the lowest-ranked guys here and they put me on the team to make an upset and do something big and that’s what I’m ready to do.

“Just look at the team. I mean, this team is just the best in the world. We proved it last year and we’re ready to take on this challenge again. I’m happy to take my part in the team and looking forward to racing these two strong guys.

“The work is done. I’m ready to race. Obviously there is some catching up maybe to do if this guy [Royle] is pushing the swim really hard but he’d better prepare for the bike and run. So yeah, I’m looking forward [to it] and now it’s just time to relax, put the feet up and then we will win as a team.”

On being at the Collins Cup: “It’s huge… I pretty much had to beg for a start for Canada and I got that, and off the back of that, that’s got me into this for sure…Just super happy to be here amongst what is probably the 18 best male and female triathletes there are. So super excited to be here and can’t wait to race these guys.”

For more reaction to the match-ups

Hear what the athletes make of their match-ups as they try to psyche out their opponents.

Watch the big event live, match-by-match as the athletes bid for team victory in a battle to see who rules triathlon. For all the details visit https://protriathletes.org/events/how-to-watch/