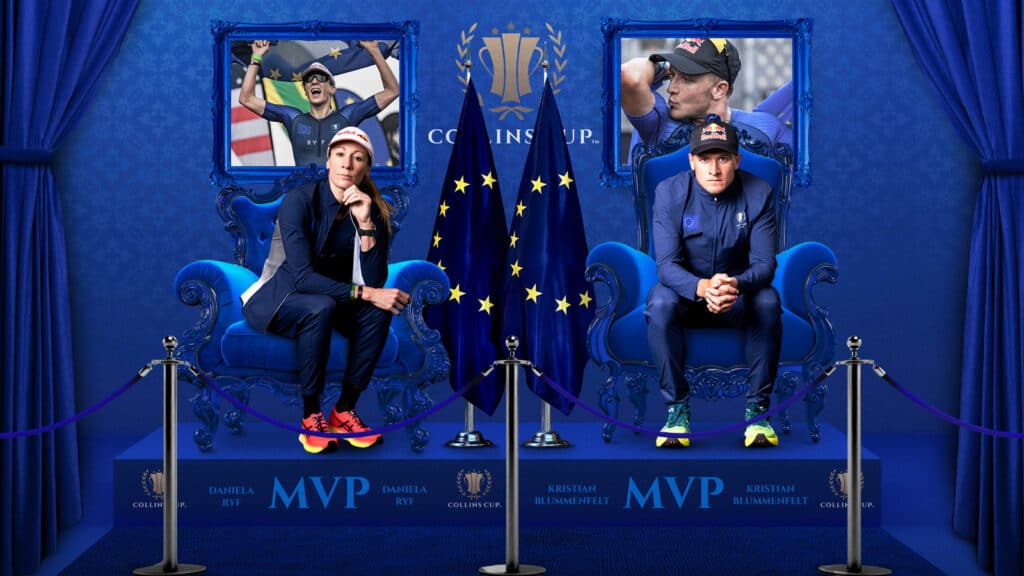 LONDON, ENGLAND: The Professional Triathletes Organisation today announced that Team Europe members Daniela Ryf and Kristian Blummenfelt have been awarded the Erin Baker and Dave Scott Awards as the Most Valuable Players for the 2022 Collins Cup.

Ryf, ten-time world champion, arrived at the Collins Cup with revenge on her mind after having had an off day at last year’s event – and she did not disappoint.  European Captain Natascha Badmann put Ryf out in the first match against the reigning Olympic Gold Medal winner, Flora Duffy (Team International), with Sarah True (Team US) rounding out the match. Ryf put on a display of power and speed, scoring the maximum six points, that left no doubt that Team Europe was there to win and win big.

Collins Cup Team Europe Captain, Natascha Badmann, commented: “Daniela came to this year’s Collins Cup with something to prove. We wanted her in the first match to set the tone for the race, which was that Europe was there to take to no prisoners. Her performance was exceptional and put Team International and Team US on notice that they were in for a very long day.”

Daniela Ryf commented: “It was a privilege to be on Team Europe once again for the Collins Cup. I was glad this year I was able to help Europe to another victory. It was an honour to meet Erin Baker, who was Team International’s captain, and to receive the Erin Baker Award.”

The Erin Baker Award is named after New Zealand’s Erin Baker a nine-time World Champion over all distances, from sprint to long-distance. Baker won a total of 104 of the 121 races she entered. Most times she didn’t just win, but romped home by huge margins. The American magazine Triathlete commented on her success by saying, “We’ve stopped trying to figure Erin out, we just accept her as the best female triathlete that ever lived”. Baker’s legacy extended beyond her tremendous performances as she was a pioneer who insisted on gender equality in triathlon. Her legacy in this area is vitally important to the PTO. Building on Erin’s work, the PTO continues its unprecedented commitment to gender equality, adopting a 15-month paid maternity leave programme. The PTO is honoured to name the Women’s Most Valuable Player award in recognition of Erin Baker.

The Olympic Gold Medal winner, current Ironman® World Champion and reigning World Triathlon Champion, Kristian Blummenfelt had the fastest time of the day and crushed any thought of a comeback by Team US and Team International by putting up the maximum six points on the board for Team Europe in the first men’s match of the day.

Normann Stadler, Team Europe Captain, commented: “Kristian had one goal and that was to vanquish his opponents and destroy any hope of Team International and Team US thinking they could recover from the strong performances of the European women. He wanted to score the maximum six points. With the fastest run of the day, he drove hard to the finish line to make an emphatic statement on Europe’s dominance.”

Blummenfelt commented: “It was exciting to participate in my first Collins Cup. I was ready when Normann put me in the first men’s match, and I am glad I was able to reward his confidence in me by bringing home six points for Team Europe. It was an honour to be part of Team Europe and to be awarded the Dave Scott Award.”

The Dave Scott Award is named after the six-time World Champion. Dave established triathlon as a truly professional sport, setting record after record as he dominated his competitors. He raised the standard and led the way for the next generation of professionals to rack-up the great performances they now achieve. It is only fitting the award given to the men’s most valuable player at the Collins Cup be in honour of Dave Scott.

You can relive every moment of The Collins Cup via PTO+.