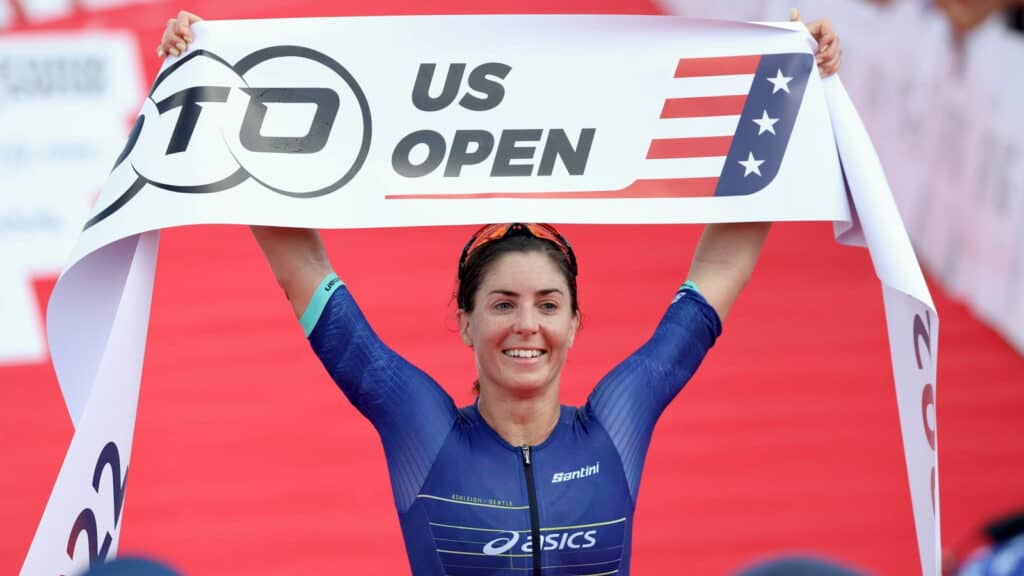 Dallas, Texas: Ashleigh Gentle stormed to a PTO US Open win in Dallas to add to her stunning victory in the PTO Canadian Open in July.

“I’m getting all emotional now,” said a jubilant Gentle. “It’s been a really good year – it’s been a lot of fun. I’ve definitely been enjoying the sport again. Thanks to the PTO for putting this on and giving us triathletes the opportunity to race these world-class events against world-class athletes. It’s a privilege to be here and I am just absolutely in shock.”

On the race in the Texan heat, the PTO World #6 said:

“I had to dig to the depths of myself for that one – that was really, really tough.  Seeing the group ride away was a little depressing but I just tried to keep my head in the game and hope that I could run into a good position. I absolutely did not expect to have run into the win.”

“I’ve been telling myself the last couple of days that it is not that hot but it is very hot and I just tried to manage my pacing well. I guess it paid off.”

Second-place finisher, Taylor Knibb, the PTO World #7, was in pole position for much of the race and takes home $70,000. The 24-year-old American said: “I’m just so grateful to go to get to the finish line. I don’t know how I made it… I was just dying, overheating. I couldn’t move any faster. Like that was. I don’t know how I made the finish line. And that’s pretty much all I can say.”

The third-place getter, Lucy Charles-Barclay, was first out the water, hung tough on the bike, and ran strongly to take the final podium position and $50,000. The British star and PTO World #5 said: “That was absolutely brutal out there. And to anyone who is finishing this in these conditions, these ladies are just hard as nails. That was incredibly tough conditions to overcome. And yeah, I’m just happy to make the finish line, to be fair.

“I had my fair share of nightmares out there. Unfortunately, I was stuck in the hardest gear for the first two laps. I think the battery must have died or overheated and the mechanic gave me a new battery. Once we got that sorted, I felt up and running, but I had lost my nutrition… this is not the environment where you want to lose your nutrition. So I just had to keep my head, try and get as much nutrition on board and tough it out on that bike psychologically.

“I had to dig deep and find something. I mean, I’ve trained incredibly hard. So, you know, this is the moment that you’ve been working for. And when things don’t go quite right, you’ve just got to tough it out. And I think I’ve gained a lot just from overcoming those things going into my next races.”

As predicted, Lucy Charles-Barclay was soon at the front in the water, Taylor Knibb the only athlete to stick on her feet. With the rest of the field strung out behind them, the Brit and American came out of the water for the mid-way Australian exit with a lead of 31 seconds to a group including Holly Lawrence, Ashleigh Gentle, Flora Duffy, Paula Findlay and Lisa Norden.

By the end of the swim, that lead had only increased, with Charles-Barclay and Knibb leaving the water in 27:01 (1:21/100m) one minute ahead of the chasers. Charles-Barclay stole a march of around 15 seconds on Knibb through T1 while the chase pack was led onto the seven-lap bike course by Holly Lawrence, 1:05 after Knibb.

At around 8km into the 80km course, Knibb surged past Charles-Barclay and began to put time into everyone on the course. During lap two, Charles-Barclay, who had already lost her race nutrition bottle from the rear of her bike, had a brief stop to address an issue with her electronic shifting, which had apparently overheated under the Texan sun.

By halfway through the bike, Knibb’s buffer was 1:51 to Charles-Barclay. In turn, the Brit had a 1:12 gap to the four chasers who’d detached themselves from the rest: Holly Lawrence, Paula Findlay, Flora Duffy and Lisa Norden, some 3:03 off the leader.

By the start of the final lap, Knibb’s lead was up to 3:04, Charles-Barclay holding steady at 2:08 ahead of the chase pack and losing a more time – now 5:13 behind Knibb. Meanwhile PTO Canadian Open winner Ashleigh Gentle was leading the second chase group, 6:19 from the front and 1:06 from the podium contenders ahead.

Showing no sign of weakness, Knibb pushed on to T2 and after a controlled transition, started the 18km, five-lap run with a lead of 3:42 to Lucy Charles-Barclay. 2:25 later (6:07 behind Knibb), Findlay, Duffy, Lawrence and Norden began the run shoulder to shoulder. However, it wasn’t long before Duffy, the double Commonwealth Champion upped the pace to take a clear third place on the course.

Ashleigh Gentle, eighth off the bike and 6:52 off the lead, stormed onto the final leg, quickly establishing herself as the fastest runner on the course. Soon, Duffy faltered while the Australian seemed unphased by the heat overtaking within the first 5km.

From there, Gentle continued to hunt her prey, overcoming her deficit to Lucy Charles-Barclay by 10km. Initially, it seemed the Aussie would run out of road to catch Knibb, but the American was reduced to a walk over a couple of short sections as the conditions took their toll.

Making the pass just before the 16km mark, Gentle had 2km of running to soak up the fact she would be taking a second consecutive PTO Open victory worth another $100,000. She crossed the line in 3:37:17 after a 1:04:59 run, which was four minutes faster than any other woman.

Olympic sprint legend and Dallas native, Michael Johnson, who was a special guest at the event and got involved with the TV commentary, said of Ashleigh’s win:

“That was incredible to watch.  You just have to focus on your own performance – that is the mark of the true champion. Congratulations.”

“The athletes certainly delivered today. That was a fantastic race. From Lucy’s blistering start in the water to Taylor’s supreme bike and then Ashleigh’s almost superhuman run, we were treated to an exhibition of the very best of our sport. Huge congratulations should go to Ashleigh for an unbeaten PTO Tour season – she’s set a high bar for the rest to follow next year.”

The final event of the PTO Tour was broadcast live around the world in over 170 territories,  thanks to a series of broadcast deals led by an exclusive 3-year partnership with Warner Bros. Discovery for exclusive live race coverage in Europe and Indian Sub-Continent.

How To Watch The PTO US Open Men’s Race

The PTO US Open men’s race will also feature a stacked field and takes place tomorrow, Sunday 18 September, with the broadcast beginning at 14:30 CDT.

If you’re in Europe or the Indian Subcontinent, you can watch LIVE exclusively on Eurosport, Discovery+ or GCN+. Highlights and race replays will be available 48 hours after the race in these regions via PTO+.

If you’re in the rest of the world, you can watch LIVE on PTO+ with pre-race coverage including countdown shows and press conferences also available on the same platform.

The PTO is a new body co-owned by the professional triathletes, united in their desire to take the sport of triathlon to the next level. The inaugural PTO Tour race schedule for 2022 included: the first-ever PTO Canadian Open (July 23-24); the second edition of $1.5M Ryder Cup-style Collins Cup (August 20), which sees Team Europe take on Team USA and Team International; and the first PTO US Open (September 17-18). Each Open carried a minimum prize money of $1M and was raced over 100km (2km swim, 80km bike and 18km run). In 2023 and 2024, the PTO Tour plans to expand with the PTO European Open and the PTO Asian Open, alongside their US and Canadian equivalents and the Collins Cup. 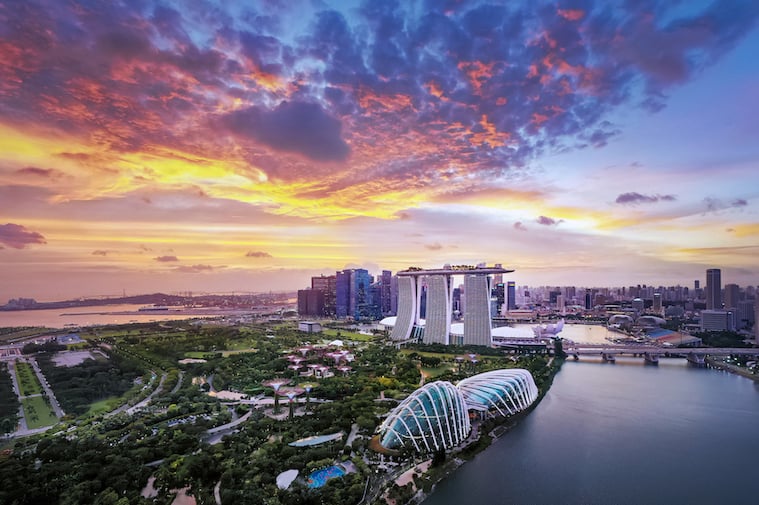 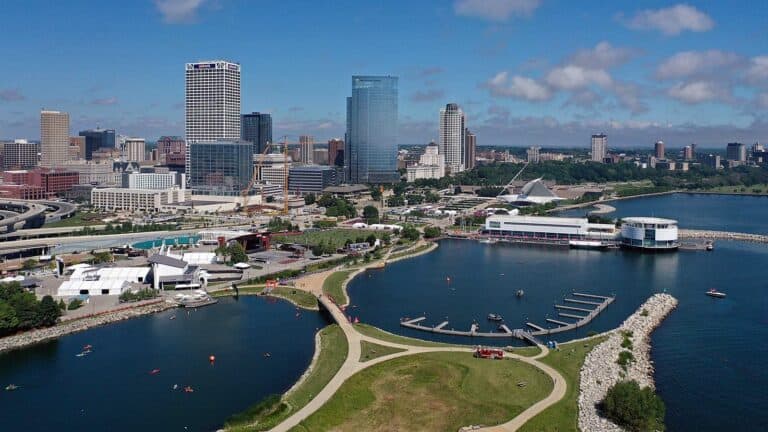