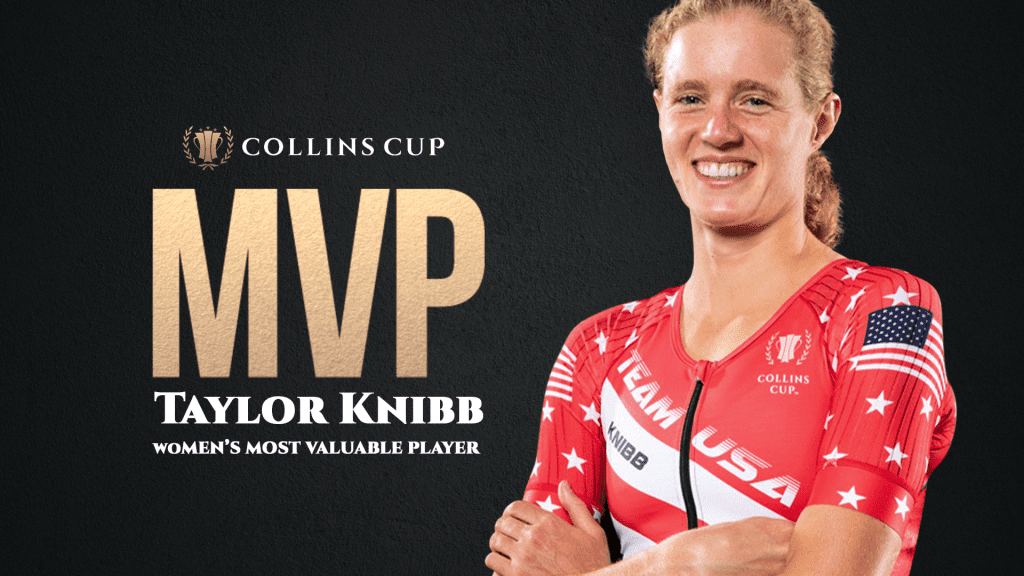 LONDON, ENGLAND: The Professional Triathletes Organisation today announced that Team US member Taylor Knibb has been awarded the Erin Baker Award as the Women’s Most Valuable Player for The Collins Cup.

The young American arrived at the Collins Cup as a bold Captain’s Pick by Team US Captains Karen Smyers and Mark Allen, who then doubled down hard, by choosing to send Knibb out against PTO World No. 1 Daniela Ryf from Team Europe and PTO World No. 2 Teresa Adam from Team Internationals.

Smyers commented, “The night before the draft match-ups, Mark and I sat down with Taylor and told her that if we had the chance, we wanted to put her against Ryf, and she said she was ready. While she clearly has great respect for the PTO World No. 1 and nine-time World Champion, Taylor has the fearlessness of youth, and she would never back down from the challenge.”

23-year-old Knibb, the Olympic Silver Medal winner in the mixed relay in Tokyo, led from the first swim stroke and shocked the triathlon world with her stunning performance. While Europe’s Ryf and the Internationals’ Adam had off days, Knibb left no doubt that she is a force to be reckoned with by having the fastest time of the day by a full three minutes, and the fastest time on the bike, despite using a road bike on a flat, fast and windy course.”

Mark Allen, US Team Captain commented, “Taylor’s performance was truly remarkable, and no one deserves the Erin Baker Award more than she does. I had the privilege of seeing Erin Baker race, and she was fearless and relentless, traits that we see in Taylor. She is a superstar in the making.”

The Erin Baker Award is named after New Zealand’s Erin Baker a nine-time World Champion over all distances, from sprint to long-distance. Baker won a total of 104 of the 121 races she entered. Most times she didn’t just win, but romped home by huge margins. Baker was named “Triathlete of the Decade” by American magazine Triathlete. The magazine commented on her success by saying, “We’ve stopped trying to figure Erin out, we just accept her as the best female triathlete that ever lived”. Baker’s legacy extended beyond her tremendous performances as she was a pioneer who insisted on gender equality in triathlon. Her legacy in this area is vitally important to the PTO. Building on Erin’s work, the PTO continues its unprecedented commitment to gender equality, and last year adopted a 15-month paid maternity leave programme. The PTO is honoured to name the Women’s Most Valuable Player award in recognition of Erin Baker.

About the Professional Triathletes Organisation
The Professional Triathletes Organisation is a not-for-profit entity consisting of both men and women professional triathletes who have come together to form a representative body which not only gives them a meaningful voice in the way the sport operates but a means to contribute to its growth for the benefit of the entire triathlon community. The PTO seeks to showcase the passion, talents, determination, struggles and achievements of its dedicated professionals through iconic events, reimagined broadcast and compelling storytelling, inspiring global sports fans to watch, engage and participate in Triathlon. The PTO’s inaugural flagship event, The Collins Cup, was held on 28th August 2021 in Samorin, Slovakia and was a head-to-head showdown between the world’s greatest athletes to determine who rules triathlon.