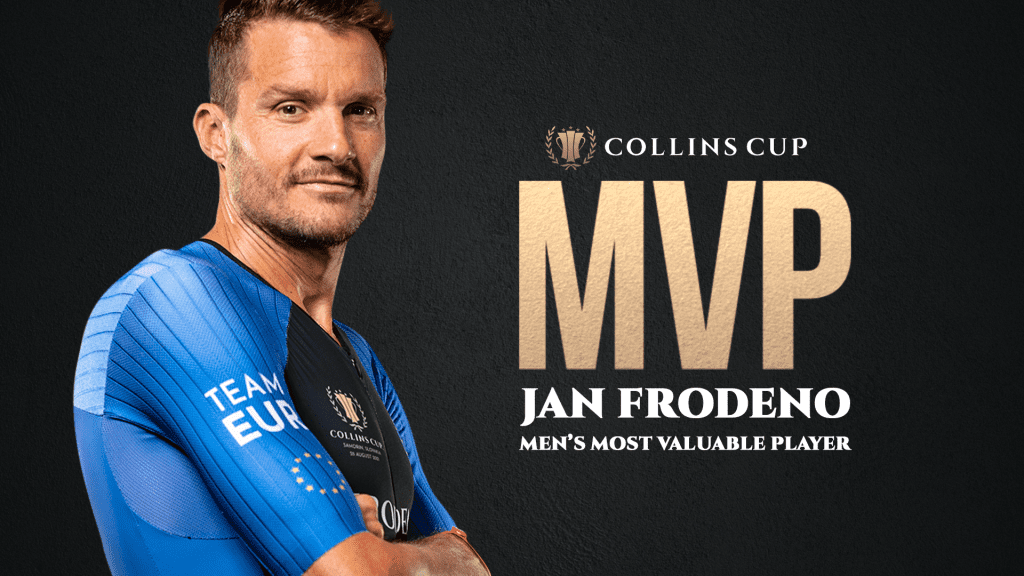 LONDON, ENGLAND: The Professional Triathletes Organisation today announced that Team Europe member Jan Frodeno has been awarded the Dave Scott Award as the Men’s Most Valuable Player for The Collins Cup.

The Olympic Gold Medal winner and five-time World Champion had the fastest finishing time of the day. More importantly, at the time his match started, the leader board was flooded with the colour red after the USA women drew first blood with a shocking win by young American Taylor Knibb over Team Europe’s PTO World No. 1 Daniela Ryf and Team Internationals’ PTO World No. 2 Teresa Adam.

Faced with a stunned Team Europe, Captain Normann Stadler needed a strong performance from the big German and Frodeno did not disappoint. He not only won his race against USA’s Sam Long and Team Internationals’ Sam Appleton but earned two vital bonus points.

Recounting Frodeno’s performance, Stadler remarked “With some early surprises from the USA women, we needed Jan to step up and stabilise our Team and rack up some bonus points. With two kilometres left in his match, Jan was 3 minutes and 40 seconds ahead of Sam Appleton and needed to gain another 20 seconds in order to secure an additional half bonus point. To see Jan practically sprint the last two kilometres at the end of a gruelling race to gain Team Europe an added half bonus point just shows what the Collins Cup meant to him and how much he wanted to lead the European Team to victory. It was a stellar performance worthy of the Dave Scott Award for the Men’s Most Valuable Player.”

The Dave Scott Award is named after the six-time World Champion who truly established the professional status of triathlon. He set himself apart from his competitors, and broke record after record. Scott’s unwavering standards have paved the way for the next generation of professionals to deliver their own standout performances. It is only fitting that the award given to the Men’s Most Valuable Player at The Collins Cup be in honour of Dave Scott.

About the Professional Triathletes Organisation
The Professional Triathletes Organisation is a not-for-profit entity consisting of both men and women professional triathletes who have come together to form a representative body which not only gives them a meaningful voice in the way the sport operates but a means to contribute to its growth for the benefit of the entire triathlon community. The PTO seeks to showcase the passion, talents, determination, struggles and achievements of its dedicated professionals through iconic events, reimagined broadcast and compelling storytelling, inspiring global sports fans to watch, engage and participate in Triathlon. The PTO’s inaugural flagship event, The Collins Cup, was held on 28th August 2021 in Samorin, Slovakia and was a head-to-head showdown between the world’s greatest athletes to determine who rules triathlon.