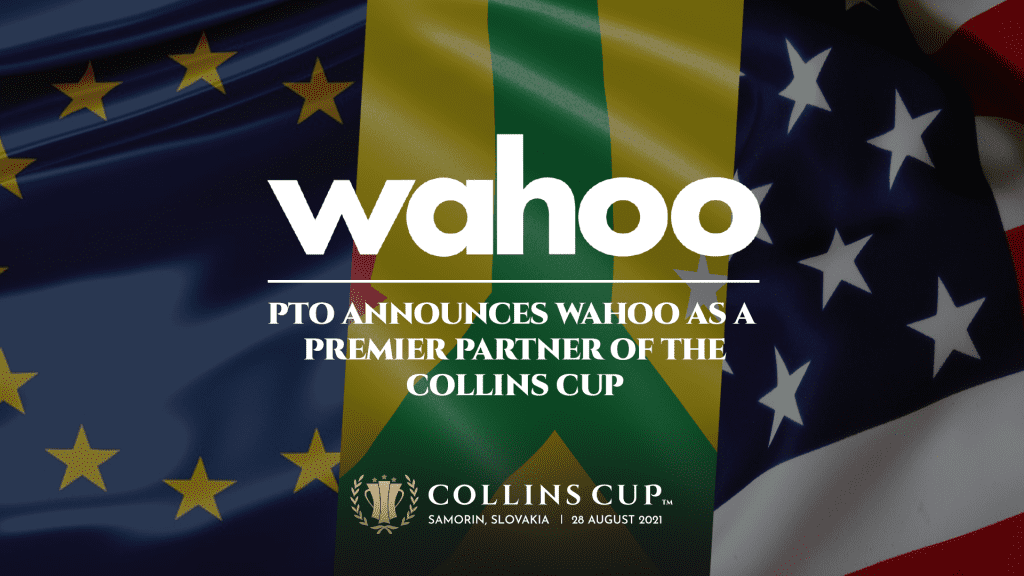 Scheduled to take place on 28th August at the extraordinary x-bionic® sphere in Šamorín, near Bratislava, Slovakia, The Collins Cup is a new race format modelled after the Ryder Cup, which will see teams of European, International and USA athletes pitted against one another and put on display the excitement, rivalry, drama and personalities of the sport of triathlon.

The partnership centres around activation in the lead up to and during The Collins Cup. Wahoo products will be offered as prizes in the Collins Cup Fantasy Competition where lucky fans who correctly guess race match-up results have the chance to win a Wahoo KICKR. Wahoo will own the Transition Area on race day and deliver consumer demonstrations. Wahoo KICKRs will also be available in the Zwift Training Zone during event week which will serve as a key training location for athletes to prepare for the competition.

Mike Saturnia, CEO of Wahoo said : “We’re very excited to partner with the PTO for the inaugural Collins Cup, which will showcase an entirely new format for triathlon. The Transition Zone is the perfect place for us to highlight the Wahoo ELEMNT RIVAL multisport watch, the newest addition to our ecosystem. The transition is the critical intersection connecting the swim, bike and run and where two of the RIVAL’s stand-out features make a big impact: ‘Touchless Transition’ and ‘Multisport Handover’, allowing athletes to focus on their race, not just their equipment”.

Sam Renouf, CEO of the PTO, said: “We are thrilled to partner with Wahoo for the inaugural Collins Cup. Wahoo is the perfect partner to help us showcase the sport to not only triathletes but to a global community of cyclists and general sports fans who crave the rivalries that will be put on display when the best athletes in the world do battle for the Collins Cup”.

About the Professional Triathletes Organisation:
The Professional Triathletes Organisation is a not-for-profit entity consisting of both men and women professional triathletes who have come together to form a representative body which not only gives them a meaningful voice in the way the sport operates but a means to contribute to its growth for the benefit of the entire triathlon community. The PTO seeks to showcase the passion, talents, determination, struggles and achievements of its dedicated professionals through iconic events, reimagined broadcast and compelling storytelling, inspiring global sports fans to watch, engage and participate in Triathlon. The PTO’s inaugural flagship event, The Collins Cup, will be held on 28th August 2021 in Samorin, Slovakia and will be a head-to-head showdown between the world’s greatest athletes to determine who rules triathlon. Sign up here for updates.

About Wahoo
Located in Atlanta, United States, Wahoo has created a full ecosystem of sensors and devices for runners, cyclists, and general fitness enthusiasts. Wahoo’s award-winning line of products include the KICKR family of smart indoor riding equipment and accessories, the ELEMNT family of bike computers and sport watches, the TICKR family of heart rate monitors, as well as Speedplay dual-sided pedals and Wahoo SUF structured training software to help you become the most complete athlete. Learn more about Wahoo’s full line of products and apps at wahoofitness.com.