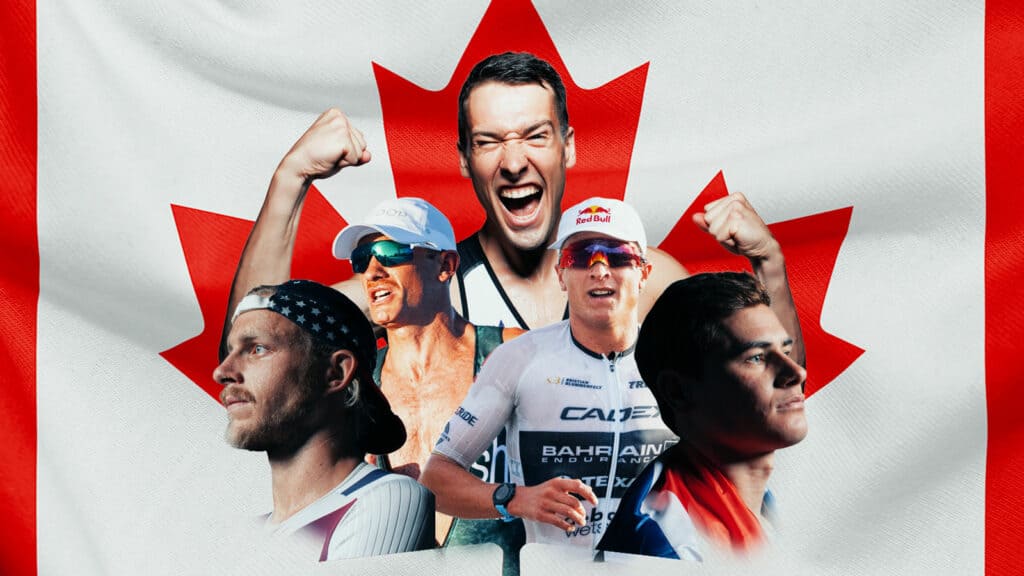 The PTO Canadian Open action continues on Sunday with a stellar men’s field battling for the $1m prize purse in Edmonton.

As in the women’s race, the men will fight it out for a chunk of the massive $1m prize purse. As Kristian Blummenfelt said in the Race Week video series – for the winner it’s 100k for $100k.

Live coverage of the race starts at 12:30am local time (18:30 UTC). If you’re in Europe or the Indian Subcontinent, the race will be broadcast live exclusively on Eurosport. For the rest of the world, you can watch either via desktop or app on PTO+. Check out our How To Watch page for full listings.

As well as deep competition with one of the best fields we’ve ever seen lining up, the race course itself will add a huge challenge on the bike once the athletes leave the water after 2km in Hawrelak Park Lake. Technical with four laps featuring tight turns, sharp climbs and fast descents, there isn’t a moment of let-up or the chance for athletes to get their heads down over the 80km course. On the run, it’s four laps again, the mixed terrain and wooded setting providing a beautifully fast finish.

The men’s race has an abundance of talent, all striving to clinch the first PTO Tour title in history. Here’s a run-down of some of the highest-ranked athletes to watch out for.

Fellow Norwegian Gustav Iden (PTO World #3) is likely to be Blummenfelt’s biggest competition. The two-time 70.3 world champion and PTO 2020 Championship winner is undefeated at middle distance racing. “It’s not like you forget you’re friends out there,” said Iden of his training partner during the press conference. “But I think the will to win is quite strong in both of us. So I don’t think we’ll give each other too much slack towards the end of the race. I guess, at the start, maybe, but when things get really tough towards the last few Ks of the run, I think all logic just goes out the window and you just want to finish first.”

Lionel ‘No Limits’ Sanders (PTO World #5) might be Canadian but he trains ‘Norwegian style’ under coach Mikal Iden (brother of Gustav). He was clear what beating Iden and Blummenfelt would mean to him: “These guys to my right – and Brownlee as well, obviously – are the best guys in the world, truly. So it would mean more than anything I’ve accomplished in my career, most definitely.

“It’s not that fun finishing second, I’ve got lots of seconds. I would like to be gunning for the win so there’s only one way to do it and it’s to absolutely destroy the bike. Yes the back-half of the run gets extremely painful because of it, but that’s part of the game plan.”

Matt Hanson moved up to PTO World #10 after a sensation race at IM Des Moines where the US athlete showed he could bike with the best of them, taking the day’s fastest split. Add in the astonishing run pace he showed at the PTO 2020 Championship and Hanson is not one to be underestimated.

Jackson Laundry (PTO World #17) will be wanting to take the top spot and beat fellow Canadian Sanders into the bargain. He’s already achieved that feat once this season at 70.3 Oceanside, so the rest of the field is sure to watch him closely in this home-soil race.

Ben Kanute (PTO World #18) is one of the sport’s most versatile athletes and is sure to feature throughout the day. A veteran of World Triathlon competition – and the technical ability that goes with it – the course could suit Kanute perfectly making him a real threat.

The depth of field far from stops there with up-and-comer Sam Laidlow (PTO World #20) knocking on the door of a world-beating performance, plus the triple threat from down under of Australia’s Max Neumann (PTO World #23), Sam Appleton (PTO World #24) and Kiwi Kyle Smith (PTO World #25).

Viewers should also keep an eye out for South Africa’s Henri Schoeman – an all-around star with a super swim who’s also an Olympic medallist.

While he’s not highly ranked right now having not raced for a while, no-one will be underestimating double Olympic Champion Alistair Brownlee, who was a late entrant to the event. “I feel healthy, although maybe not that fit,” said Brownlee. “I’m absolutely delighted to be here. I’m happy to be injury free and looking forward to racing as hard as I can and just enjoying it. I also think it’s a great opportunity to support this first event of the PTO Tour, which I think is a fantastic project and I felt like it was important to be here from that aspect as well.

“I’ve been a triathlete since I was eight years old and when I was 16 I remember [being] sat in a careers class in school… you’re going along the table: I want to be a brain surgeon, I want to be a lawyer or whatever, and I said, ‘I want to be a professional triathlete,’ and the teacher said, ‘Is that even possible, boy?’ And I said, ‘I don’t know to be honest but I’m going to give it a go.

“Nearly 20 years later, I have managed to be a professional triathlete. But still, I think there’s a long way that triathlon can go in terms of commercialising the sport and providing opportunities for exposure and earning for elite athletes, especially in the long-distance side of it. There are some phenomenal athletes and I think there are great stories to be told, there are great athletes to watch and for fans to follow and there needs to be a format to do that. I think the PTO is bringing that and pushing up every other organisation’s game around it.”

That covers just a few of the men lining up in Edmonton with plenty more who’re sure to factor into race proceedings. Check out the full men’s start list below to see the full field vying to be called the PTO Canadian Open champion.