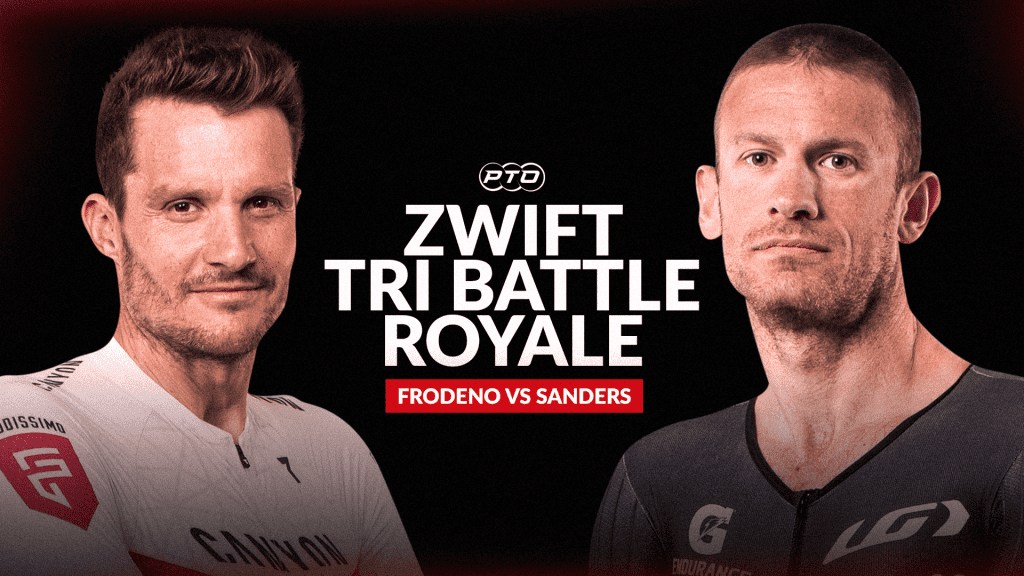 Jan Frodeno and Lionel Sanders go head-to-head in this weekend’s Zwift Tri Battle Royale – a real-world race that could be a duel for the ages culminating in a new iron-distance world record.

Taking place on 18 July and with an all-day livestream of the event from 8:40am CET, we’ll get the chance to see these two triathlon titans battle it out over a 3.8km swim, 180km bike and 42.2km run in Allgau, Germany.

With lane ropes in the swim, talk of velodrome-style banked turns on the bike and a virtually flat run – all on a closed course – Tri Battle Royale is setup for speed and if all goes to plan, we could see Frodeno’s 7:35:39 iron-distance world record tumble.

Join In With PTO Fantasy Triathlon

To get involved with the fun, we’ve launched our Fantasy Triathlon game, which gives you the chance to predict swim, bike, run and transition times for both athletes to see how your guesses compare to fellow triathlon fans.

Everyone who plays starts on an even footing of 5,000 points. For each discipline, the difference in seconds from your predictions to the actual race time will be deducted to give you your overall points. The more of your starting points that you finish with, the higher you’ll be ranked – all in the name of fun.

So where should you start with your predictions? We’ve got the low down on both athletes’ histories, their racing stats, head-to-head record and some suggestions on race dynamics to help you choose wisely.

What The Stats Say

Looking back through the 2008 Olympic champion’s race history underlines why he’s justly considered at the world’s best long-course athlete. Since winning 70.3 Oceanside in March 2015, Frodeno has won all but two of the events he’s completed – Lanzarote in 2016 and Kona in 2017 – and suffered only one DNF.

All in all, the German champ has scored 14 IM 70.3 wins and eight iron-distance victories, giving him a winning record of 76% races he’s started and a podium record of 90%.

The Canadian has more racing under his belt and many more middle-distance victories than his rival, topping the podium a whopping 23 times. Despite this, he’s only raced the 70.3 worlds twice and not since 2016. At the full distance, Sanders has half the wins of Frodeno with four victories, but also has the 2017 ITU Long Distance world title.

Taking all his race starts into account, Sanders has a winning record of 57% in long-course races and an impressive podium hit rate of 76%.

When they’ve faced off against one another in the past, Frodeno has definitely come out on top. Of the nine races they’ve toed the line together, Sanders has finished ahead of Frodeno only once – when the German walked the Kona marathon in 2017 due to a back injury. That gives the German an 88% winning rate.

In the swim, Frodeno bested Sanders 100% of the time while the two are most closely matched on the bike, Sanders taking 55% of the wins. On two feet, it’s once again Frodeno who’s favoured by the stats, outrunning Sanders 77% of the time.

Looking at 2021, both athletes went head-to-head at Challenge Miami, a race shorter than 70.3 distance. Here Frodeno won by over two minutes though Sanders did post the faster run of the pair.

Frodeno is yet to take on the iron-distance this year, which might have put him at a disadvantage had it not been for Sanders’ nutrition meltdown in 39°C heat at Ironman Coeur d’Alene. Going into the event as race favourite, Sanders came within a shouting distance of the lead on the run but was reduced to a walk after vomiting heavily at the roadside. All that surely creates a mental and physical blow that will be hard to recover from in just two weeks – while also putting Sanders’ participation in Kona this year in jeopardy.

Despite Sanders’ improved swim, Frodeno will surely lead out of the water – the question is by how much? As long as the gap isn’t so great that Sanders loses all hope, we could be in with a nail-biting cat-and-mouse on the bike.

While Frodeno is used to leading on open roads, Sanders has always had to race through a pack of faster swimmers to reach the lead – all the while having to be vigilant of drafting distances and make huge surges to pass athlete after athlete. Free to set his own pace without the complexities of other riders on course, expect Sanders to put in some serious speed. His Canadian hour record on the track proved that free from distraction, he can judge his effort perfectly.

If we’re lucky enough for the two to hit the run close to one another, we’ll be in for a treat. Yes, Frodeno has run quicker, but Roth is known for being a little short on the marathon. We’ve never really seen Frodeno challenged shoulder-to-shoulder at the iron-distance either – especially by someone so determined and ferocious as Sanders. Will the big man falter as Sanders ups his game or be simply urged on to even greater heights?

Get your predictions in now and tune in to the livestream at 8:40am CET to find out.