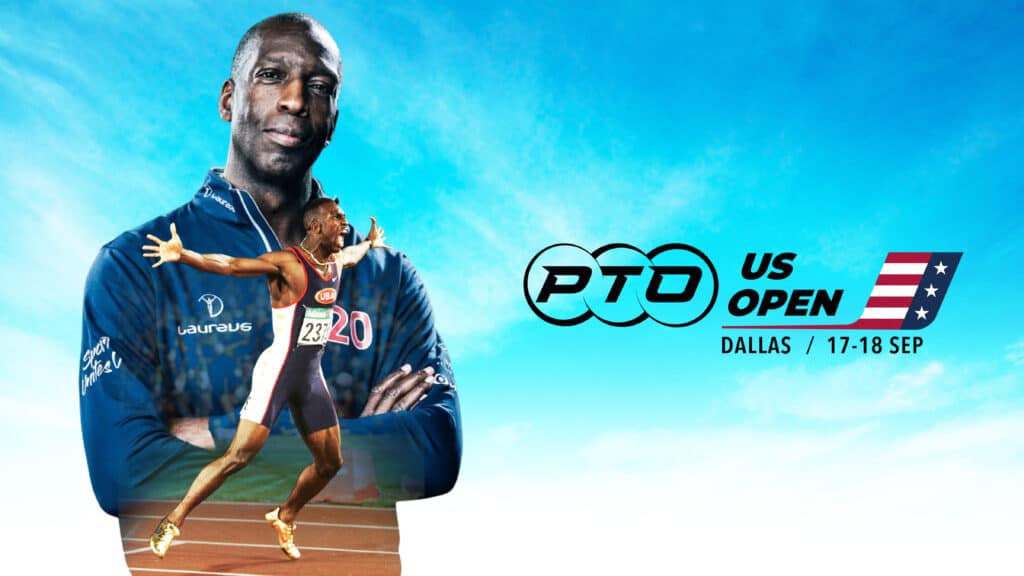 Dallas, Texas: Former Olympic sprint sensation turned respected TV commentator Michael Johnson will be a special guest of the Professional Triathletes Organisation (PTO) at the first-ever PTO US Open (September 17-18) in his hometown of Dallas later this month.

The four-time Olympic gold medal winner, who was born in Dallas and has the HQ for his Michael Johnson Performance Centre in the city, will feature on the TV commentary for the race as well as events in the build-up to the women’s and men’s pro races at a specially designed course in Las Colinas, that will create a stadium-feel event where fans will see the athletes as many as 12 times during the 100km race (2km Swim; 80km Bike; 18km Run).

Talking ahead of the event, Johnson said:

“I’m excited about getting involved in the new PTO Tour’s first race here in the US and I’m delighted they’ve chosen Dallas.”

“My first organised race was in Dallas, aged 10, as part of the Parks and Recreation summer programme, called the Jesse Owens Games. I think it was a 100-yard dash. I won it, and one of my sisters was also in the programme and she won the race before me. We were pretty happy and there was quite a family celebration.”

“I’ve always been fascinated by the limits of human performance, whatever the distances involved and triathlon does intrigue me. I remember when it entered the Olympic arena at Sydney 2000 when I was competing on the track. It certainly wasn’t the sport for me. I could never go for that long, but I remember thinking that these guys must be the ultimate endurance athletes – to not just take on one discipline, but combine three to such a high level and over significant distances. I’m looking forward to speaking to them and getting under the skin of what motivates them and how they train. For one, I know it will be very hot in Dallas at that time of year.”

Johnson is now an award-winning TV commentator and will join TV anchor Alex Payne and the rest of the PTO Tour broadcast commentary team for the race, making guest appearances for both the women’s race on September 17 and the men’s race on September 18.  Johnson has also recently finished making an eight-episode podcast series, Defiance, which looks into how professional athletes have used their voice and platforms to disrupt the status quo; something that also interests him about the PTO.

“I really like how the PTO is setting itself up, as an athlete-owned body, committed to promoting the longer distances of the sport and in a different way,” continued Johnson.

“The superhuman efforts of these triathletes haven’t always enjoyed the spotlight they deserve, so the PTO was set up by the athletes to change that, make the sport more professional and try to take it to the next level in terms of story-telling, prize-money and global broadcast. So I’m interested in finding out more about that too.  It is definitely an event that people in the Dallas area should get themselves down to.”

As well as appearing on the TV commentary – which goes out live exclusively in Europe on Eurosport and then via PTO+ to the rest of the world alongside a series of local broadcast deals with DAZN, ESPN, Fox Sports Australia, Sky Zealand, Tencent, BeIN Sport among others (more details here) – Michael will also take part in the race Press Conference on Friday 15 September (11am local time) as well as other promotional events over the weekend.

“To have someone of Michael’s reputation, international profile and local standing come to our first-ever PTO US Open races in Dallas is a huge fillip for the PTO and its athletes.”

“As an athlete, he did it all and there’s an aura to his Olympic successes that very few can compare with.  But just as importantly, he’s always been a powerful and unflinching advocate of the role of the professional athlete in their sport.  So we’re looking forward to having him be part of our event and spending time with our amazing athletes, Age Groupers and fans.”

In the women’s race there is a strong contingent of American female triathletes competing for the $1 million prize fund, led by PTO World #7 Taylor Knibb and supported by #15 Jackie Hering, #18 Jocelyn McCauley, #23 Sophie Watts, #37 Danielle Lewis and #56 Lesley Smith.  They will be up against a stellar line-up of international stars including: PTO Canadian Open winner and runner-up Ashleigh Gentle (AUS) and Paula Finlay (CAN); Team Europe Collins Cup winners Kat Matthews and Holly Lawrence (GBR). Plus the resurgent Lucy Charles-Barclay (GBR).

Media wanting to accredit for the PTO US Open should visit the media accreditation portal.