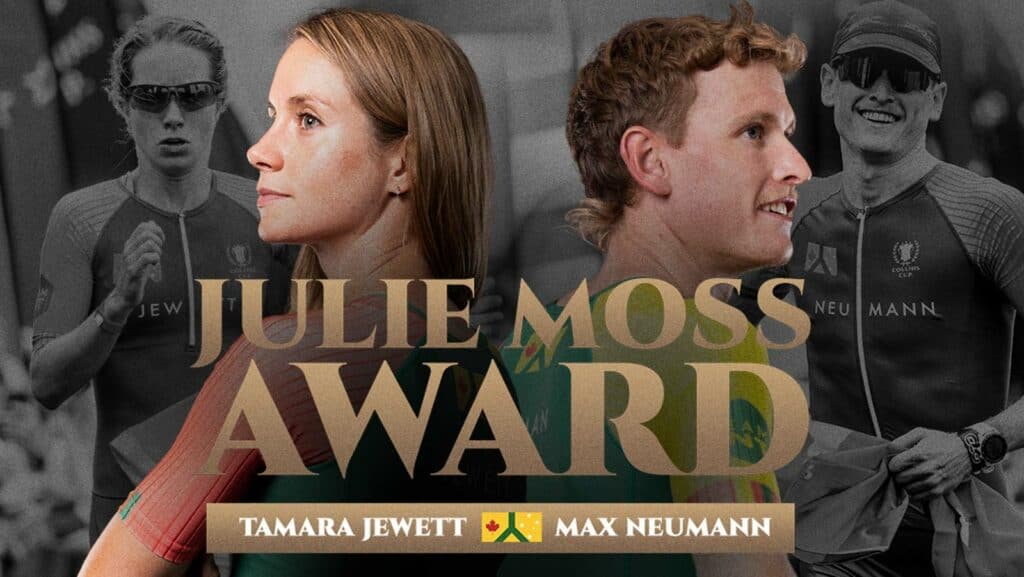 LONDON, ENGLAND: The Professional Triathletes Organisation today announced that Team Internationals’ Tamara Jewett and Max Neumann have been awarded the Julie Moss Award for their courageous performances at The Collins Cup.

The Julie Moss Award is named after Julie Moss, whose performance in the 1982 World Championship in Kona, where she collapsed and crawled across the finish line, has come to signify the indomitable spirit of triathlon. In many ways she is the inspiration of the PTO’s motto, “Dum Spiro Spero,” which means “Whilst I breath, I hope.”

Tamara Jewett was a rookie at this year’s Collins Cup. Just being able to qualify for Team International was an act of courage as she was hospitalised in February after a bike accident. She then went toe-to-toe with Team Europe’s Anne Haug, PTO World #1. Tamara had the second fastest run of the day, and not only scored 2-1/2 points for Team International, but her gusty performance denied Haug any bonus points.

Meanwhile, Jewett’s Team International compatriot, Max Neumann, led his match out of the water only to suffer debilitating cramps on the bike, ruining any chance for him to win his match. Despite being far behind exiting T2, Newmann rallied and persevered to produce the third fastest run of day, denying Team US vital bonus points – helping Team International avoid the Broken Spokes Trophy.

Craig Alexander, former World Champion and Team Internationals Captain, commented: “Both Tamara and Max epitomise the beauty of the Collins Cup, where performing for your team outweighs any individual glory. They both fought hard to the end for Team International and it was a privilege to be the captain for such fine, upstanding professionals.”

You can relive every moment of The Collins Cup via PTO+.