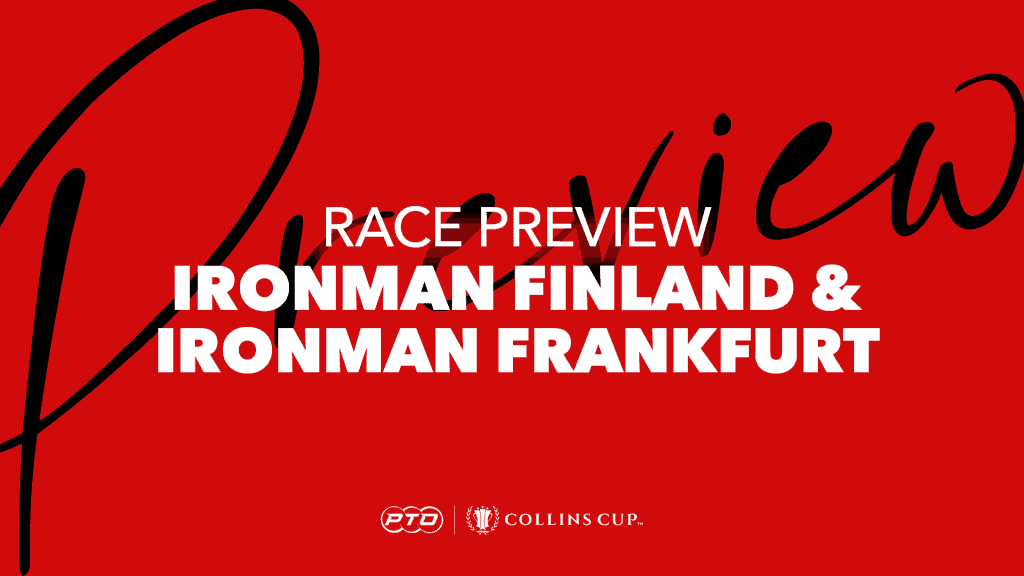 The Collins Cup qualification period may have ended, but there will still be some hard-fought racing this weekend at the Ironman European Championships.

For 2021, the men’s and women’s IM Euro champs take place at different races. The men will do battle at IM Frankfurt and the women at the inaugural IM Finland, each race featuring a $75k prize purse and three Kona slots.

As is regular in the fight for IM World Champs qualification, some athletes have their names down for several conflicting event dates, making start lists a little fluid – but here’s who we’re expecting to toe the line at these key Ironman events.

Whoever takes the win will set a course record for this first-time event, which features a one-lap lake swim, two-lap bike with 1100m of climbing and a four-lap rolling mixed-terrain run. Temperatures could be chilly and rain could cool athletes further, which could enhance or diminish performance depending on the athlete.

Imogen Simmonds is an all-rounder who can really put the hammer down and is likely to out-swim Lauran Philipp – probably her biggest rival here – to take an early lead. Second only to Kona champions Daniela Ryf at 70.3 Dubai and Anne Haug at Challenge St Polten, the Swiss athlete is in great form this year and, like Philipp, is still looking for Kona qualification.

Laura Philipp was fourth in Hawaii in 2019 and third at the PTO 2020 Championships in Daytona last December but hasn’t raced since due to Covid and a hip injury – hence her lower ranking. She’s made the most of the situation with extra pool time to improve her swimming and combining that with her exceptional bike and run speed will make her even more of a threat for the win in Finland.

France’s Manon Genet has refocused on her training and recovery following her DNF at Ironman Lanzarote in July but expect her to put it all out there in Finland to get her ticket to Hawaii. She’ll likely be chasing out the water but could find herself in good company with the other strong bikers. From there, her power on two wheels and two legs should keep her in contention.

Jocelyn McCauley (PTO #41) raced 70.3 Boulder just last weekend, her first event back after maternity leave. Ninth there was a disappointment for the American so just a week on she’s battling jet lag in Finland to go double the distance. In 2019, McCauley came tantalisingly close to beating PTO #1 Daniela Ryf at Ironman Texas – just two minutes down but nearly 20 minutes ahead of the rest of the field. Once she can recapture that form, she’ll be rising back up the rankings.

Svenja Thoes (PTO #44) is the final top-50 ranked athlete on the start list. The German came second at 70.3 Andorra in early July and is likely to be one of the powerful bikers getting out the water with time to make up.

Renee Kiley (PTO #57) has already raced three Ironmans this year but has just missed out on qualification. Like Philipp and Genet, she’ll won’t be up front after the swim, but her mega bike power could see her drive to the head of the race after that to put herself in podium contention.

Also look out for 2019 World Triathlon Long Course Champion Alexandra Tondeur (PTO #63), who came third at Alpe D’Huez Long Course and fifth at 70.3 Switzerland – if three straight weekends of racing don’t catch up with her!

If she races, Joanna Ryter (PTO #64) is also one to watch on the run after her race-best split at IM Lake Placid – 13-minutes faster than any other competitor – earned her third there.

The male-only companion to the women’s European champs in Finland, Ironman Frankfurt is one of the few chances left to gain a start in Kona this year. As such, there’s a long list of quality athletes, which should make for some close racing in Germany.

Established on the circuit since 2002, Frankfurt features a two-loop swim with a short Australian exit between each before a two-lap bike course with over 1900m of climbing and a flat, four-lap marathon. With temperatures set to near 30°C, heat could play a factor in the outcome here as in previous years.

The highest place starter on the PTO World Rankings, Andi Boecherer is already Kona-qualified. However, the German will be looking to take the win here having previously come second twice back in 2016 and 2017. In fine form this season, Boecherer took the win at IM Lanzarote in July. His bike is his weapon, but he’s a strong athlete across the board with a rating of 90%.

Of the athletes seeking a Kona ticket, Pieter Heemeryck is the highest ranked. The German has struggled this year with back problems which led to a 26th-place finish for his Ironman debut in Lanzarote but with things looking up, he could contend for the podium here thanks to great all-round swim-bike-run strength.

Also aiming to get in the top three and book flights to the Big Island, Tom Davis (PTO #40) needs a break from his bad luck in 2021 to show his true potential. A great swimmer, he could lead Heemeryck and Maurice Clavel out the water and stay up there on the bike. Then it’ll be down to how his legs hold up on the marathon – only his second ever at the end of an iron-distance race.

Maurice Clavel (PTO #47) has been targeting a home-soil win in Frankfurt, putting in a preparation block in the mountains of St. Moritz. The German showed good form with third at Challenge St Polten in May and is another strong swimmer who could form part of that bike front pack and duke it out for the podium.

Rather than qualification, Cam Wurf will be looking for more race experience this year after focusing on cycling with the Ineos Grenadiers. He struggled on the run to a fifth-place finish at the PTO-supported 140.6INN International Triathlon in May but managed third at 70.3 Andorra in July. If he’s back to his 2019 form, when he won IM Italy in 7:44, he could take victory here.

As a championship race, many of the names on the start list could factor in the standings at Frankfurt. Athletes to watch include David McNamee – a two-time Kona podium getter – will need a big performance to get back to the Big Island after struggling with burnout earlier this year and Sweden’s Patrik Nilsson who came second here to Jan Frodeno in 2018.

Also keep an eye on rookie Casper Stornes, the Norwegian teammate of Olympic Champion Kristian Blummenfelt and PTO 2020 Champion Gustav Iden. As part of Norway’s formidable short-course squad, there’s no telling what sort of a performance Stornes could pull out in his bid to join Blummenfelt, who’s already been gifted a world champs slot, in Kona.