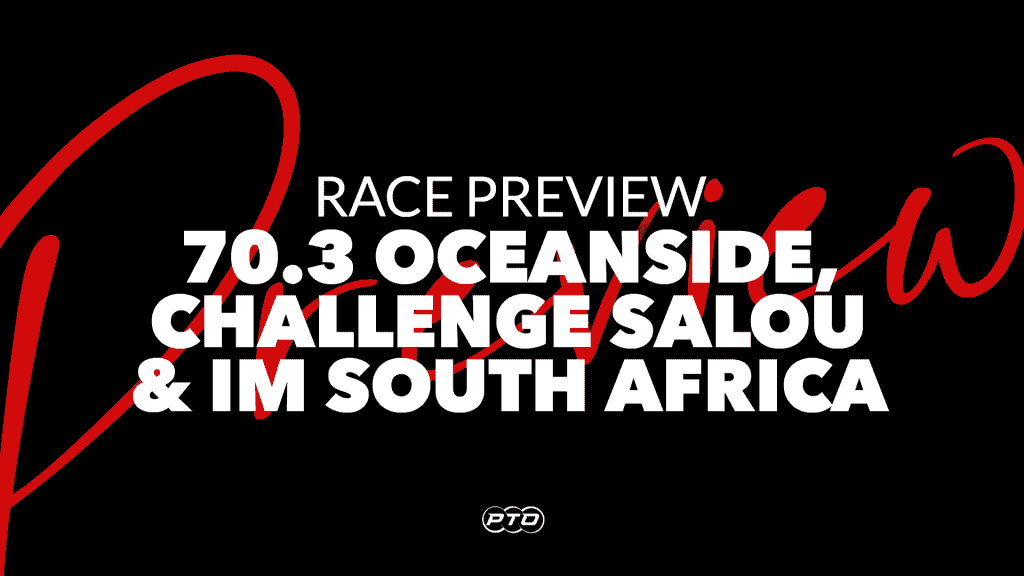 This weekend sees the 2022 pro triathlon race season really hotting up across the world with a top field taking on Ironman 70.3 Oceanside as well as serious racers toeing the line at Challenge Salou and Ironman South Africa, the African Championship.

Here’s the lowdown on the biggest names who could swim, bike and run their way onto the podium.

Always an early-season hit out for the cream of North American racing, Oceanside has even bigger prominence this year ahead of May’s Ironman World Championship in St. George.

Men’s Race – Brownlee Is Back!

Oceanside has seen many epic battles over the years – including an awesome showdown between Lionel Sanders and Jan Frodeno in 2018 – but one athlete who’s never raced in this stacked-field season opener is double Olympic champ, Alistair Brownlee.

That’s set to change on Saturday though. After his absence in the second half of 2021 following his attempts to qualify for the Tokyo 2020 Olympics and a long recovery from ankle surgery, two-time Olympic Champion Ali Brownlee is back!

Brownlee will face none other than Lionel Sanders, whose race against Frodeno here in 2018 lit a fire within Sanders that still burns strong to this day. Sanders comes into the 2022 season confident having executed strong consistent performance at the end of 2021 under the guidance of new coach Mikal Iden (big brother and coach of Gustav Iden).

Brownlee and Sanders have met before on three occasions (Challenge Samorin 2017, Kona 2019 and the PTO 2020 Championship) but on all occasions either one or both did not have strong days so have never had the chance to go toe-to-toe with one another.

Having not seen Brownlee race since his Olympic qualification bid ended in a controversial DQ at WTCS Leeds back in June 2021, it could be reasonable to have a question mark hanging over Brownlee’s form upon return… However, word on the street is that Brownlee is stronger and faster than ever over the middle and long distance!

This would bode well for him in a year where he is also set to go up against Kristian Blummenfelt in the Pho3nix Sub7 Project. While both are aiming to beat the seven-hour mark, they are equally going to be battling to see who can go under seven hours by the biggest margin.

Brownlee and Sanders may be the headline names racing in Oceanside but you should never count out the likes of Ben Kanute, Rudy Von Berg, Jackson Laundry, Sam Appleton, Matt Hanson and so many more world class athletes all on the start list.

Ben Kanute of course has won Oceanside on the previous two runnings of the race in 2021 and 2019 (the 2020 edition was cancelled due to COVID), beating Rudy Von Berg on one of those occasions in 2019 by just 12 seconds! There will certainly be a score to settle there.

The last (and so far only) time that Daniela Ryf and Taylor Knibb have raced one another was their match at The Collins Cup where Ryf was self-admittedly not on form and “arguably shouldn’t have raced but didn’t want to let the team down”. Knibb took an ‘easy’ match victory and was disappointed that she didn’t get to race Daniela on her best day. Now is Knibb’s chance to take on a refreshed Ryf, who’s back and stronger than ever with a new mindset to training, racing and life in general.

The women’s start list is equally as stacked as the men’s, meaning that if Ryf or Knibb let slip even just a little, there will be many fierce competitors ready to pounce on them for the win! Skye Moench, Paula Findlay, Holly Lawrence, Heather Jackson, Jackie Hering, Tamara Jewett and Chelsea Sodaro are all names that could be very much in the mix come Saturday.

Don’t forget to watch out for former short-course athlete Ashleigh Gentle, who’s coming off a big win at Clash Miami. A few more races like that and she’s sure to shoot up the PTO World Rankings and become a shoo-in for the Collins Cup this August.

With such strength in depth, one can only hope that there will be some dramatic racing on show pushing one another to the limit!

For those athletes staying in Europe, this weekend, the big half-distance race is Challenge Salou, which boasts a strong field looking to move up the rankings.

In the women’s race, Challenge Salou will make it two races in two weeks for Anne Haug and after a second-place finish in Lanzarote, behind Kat Matthews who scored an impressive 104.92 points, Haug will be eager to go one better and be standing on top of the podium.

It will be by no means an easy win for Haug – she will have to overcome the likes of Lisa Nordén who won Challenge Salou in 2021. Nordén has recently been training with Laura Philipp, who just became PTO World #1, so perhaps Nordén will be in equally strong form and be able to make it two-second place finishes for Haug in two weeks.

The long list of other female challengers is topped by Fenella Langridge. The Brit will be taking her brand new Trek Speed Concept out for its first race, having been flaunting the wind tunnel testing she’s been doing on Instagram, so let’s see how slick she is on course! Then there’s Laura Zimmerman, Justine Mathieux, Elisabetta Curridori and India Lee… the list goes on!

Short course superstar Vincent Luis is set to further build his middle-distance resumé with Salou being only his third middle distance race. Luis’s previous middle distances exploits include a second-place finish at 70.3 Indian Wells in 2021 behind Lionel Sanders – an incredible result given that he was knocked off his bike by a car after being sent off course.

Luis also finished eighth at the PTO 2020 Championship having received a two-minute penalty for drafting on the bike. That made his final gap to winner Gustav Iden, 2 minutes and 15 seconds. Perhaps we’ll get to see that sprint finish later in the season!

Luis will be lining up alongside Miki Moerck Taagholt, Kristian Høgenhaug, Denis Chevrot, Sam Laidlow and Clement Mignon. Like the women’s race there is a long list of other challengers racing in Salou, all hungry to bank a strong result early in the season.

Full distance racing is back! While there have already been a handful of middle distance races for pros to tick off, this is the first opportunity for those full distance specialists to flex – and the chance to walk away with the African Championship title.

Favouring the full-distance, it’s no surprise that Joe Skipper has journeyed to South Africa to race and is the hands-down favourite to take the win. Justin Metzler teased Skipper during the Collins Cup press conference for only having “one speed” and not being able to match him and Jackson Laundry over the 100km distance… That one speed however is RAPID over the full distance. Finishing off 2021 with a 100 point score at IM Chattanooga, Skipper has been banking consistent miles over the offseason so can expect a strong start from the Brit.

Other notable mentions include Collin Chartier, taking on his first-ever full-distance race. Though they did not race in the same match at the Collins Cup, Skipper’s overall finish time was two minutes faster than Chartier so if it did come down to a sprint to the finish between the two, one might expect Skipper to be able to pull out some speed over the American…

Home favourites Bradley Weiss and Matt Trautman will certainly be gunning to take the title of first South African across the line and will also be keen to get in the mix at the front of the race. Also, Jesper Svensson will be racing to overwrite his DNF at the race in 2021 and having clocked the fastest swim in 2021, he’ll no doubt be hoping to enter T1 in first and hold on for as long as he can!

Women’s Race – Bleymehl Back, But Not Without Challengers

Daniela Bleymehl had a disappointing return to racing in Dubai earlier this year with a DNF, both her first 2022 race but also her first race since returning from maternity leave. Bleymehl has multiple 100+ point scores in her race record prior to maternity leave so it surely is only a matter of time before she’s back on top.

Bleymehl will have the likes of Sarissa De Vries, winner of the World Long Distance Triathlon Championship in 2021, to contend with, as well as Emma Bilham, another strong competitor over the full distance. Kylie Simpson is also expected to be in the mix and with two 80+ point scores and one 34 point score contributing to her ranking of 55th this will surely be a chance to make a big leap in the rankings with a good result.

It is for sure going to be a busy weekend of racing around the world which we cannot wait to keep up with! Make sure you are following the PTO on Instagram to see posts about the winners and podium athletes as well as links to the full results.